One of the greatest things about Sled is that it is not just about the music. It's about visiting with friends, meeting new ones, good food, laughter, and the occasional torrential down pour--or two.

Block Party @EastVillage
I started the day off with some mini golf at Sled Island's third annual block party in the East Village. A dedicated volunteer guided visitors for 7 hours of mini golf, now that is dedication (photo courtesy of dedicated volunteer) 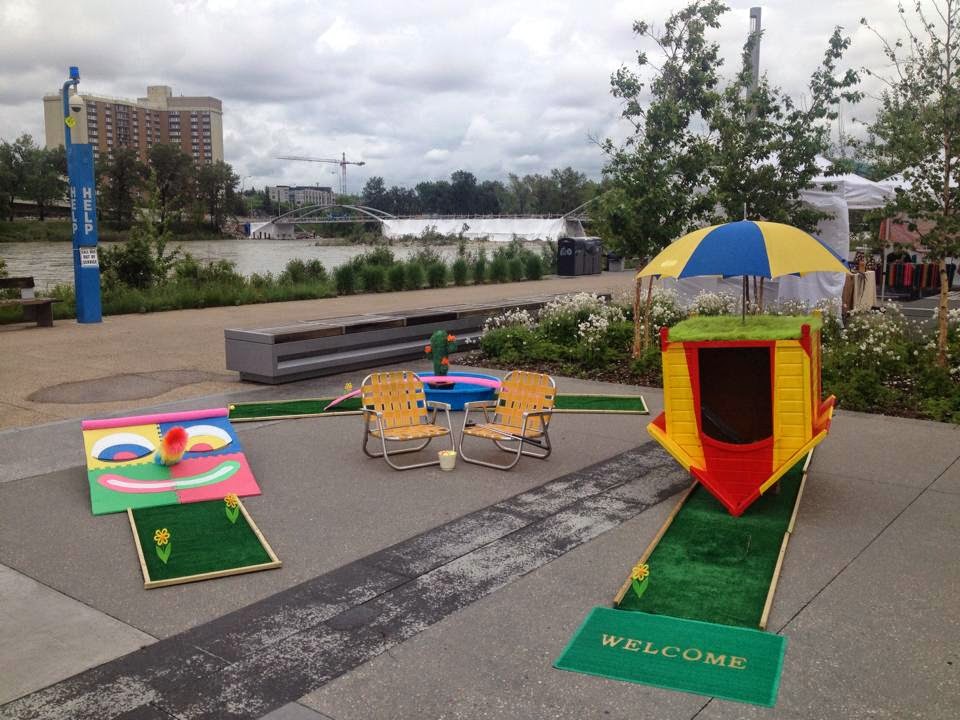 LuckyMe, STWO, Smalltown DJs and more laid it down for dancers of which there were many.

Supper @BrokenCity
Afterwards, I headed to Broken City for supper. Despite it's ragged punk appearance, Broken City has a decent menu and friendly staff. I ordered a Grilled Veggie Salad that came with freshly pickled red and yellow beets, roasted peppers, zucchini, and mushrooms; a luxurious bed of greens and a light dressing that set my tastebuds and pocket book at ease. Rumour has it they also have a chef who comes in on most Saturday's to make authentic Jamaican cuisine (yet to be confirmed). Take a look at the full menu here.

Jeff D'Silva and Guests - Jeff's Night Out @Wine-Oh's
Local funny man Jeff D'Silva was hosting a variety comedy night at Wine-Oh's Cellar, an intimate venue in the basement of a restaurant of the same name. The game was simple, Jeff and his accompanying keyboardist welcomed up local comedians and they made funny. I walked in for a comedian who shall rename nameless only because I didn't catch his name, he had me with his nephew's funeral and "ginger trucker" fashion review. My highlight of the night was Sarah Adams--I once saw Adams rock a room of punks with fart jokes for 10 minutes, it was impressive. Her set on Thursday consisted of trying to convince the audience and D'Silva that she was a multi-talented tuba player, portrait artist, tap dancer, athlete, and singer. Evan Wilson, Sled's Comedy Curator, also took to the stage to play a slightly offensive game with D'Silva where the audience needed to guess whether a phrase was said by a "crazy homeless hobo" or rapper 2Chainz. SPOILER: they were all 2Chainz lyrics.

Freak Heat Waves @Legion#1
Off to the Canadian Legion #1 where Freak Heat Waves was filling in for Red Sea. I was glad to have caught this sombre/punk trio whose cyclical bass driven melodies and lyrical guitar was accompanied by baritone vocals---reminiscent of Joy Division and overall pleasing.

Friday was a collection of joy and dismay--from the sweet Mint Records showcase to finding out that Neko Case didn't get on a plane to take her to Calgary, while her band and fans awaited--leading to a cancellation announcement three hours prior to the show-- it was a bit of a blow. But we partied none-the-less. Joel Plaskett led the way, and saved the day.

Mint Records - Super Moon @Commonwealth
Starting off a day with a Mint Records showcase is a smart choice, reliable and poppy. Super Moon are four gals, three of which were in the band Movieland. I really enjoyed the pop-punk sensibilities that date historic for Mint Records. Their vocals were soft but their skills were a plenty. I am curious to see how this band transforms or diverges in the future.

Outer Minds @Local510
This Chicago band's psychedelic soul has been on my DEP playlist for awhile with Gimme A Reason. The Friday afternoon set was deeper, darker, and more mystical--but none-the less rich in soulful keys, and twanging guitars taking the crowd through a surrealist journey into the Outer Minds world of garage and roll

Bry Webb, Blitzen Trapper, and Joel Plaskett @Olympic Plaza
Under a light drizzle to occasional large warm drops, Canadian Indie-Rock icon Bry Webb (Constantines) started his set a bit early at OP to make room for Joel Plaskett who would be playing two back-to-back sets at different venues to fill-in for Neko Case. Luckily, I came early to catch Webb and his band put on a lovely show of grit, folk, and rock. For anyone who was there: Blue Rodeo means I Love You.

And then came the rain...

Blitzen Trapper had to delay their set by about 20 minutes to wait out a downpour that filled the gutters and scattered the crowd. But they came out to play the hits for 8 songs of toe tappin' good times and heart swelling anthems.

Don't count your blessings until you have danced barefoot in a shallow warm pool of people and water to the music of Joel Plaskett Emergency in the pouring rain. Plaskett paid the piper and did a solid for the festival and fans by showing up at Olympic Plaza to fill-in for Neko Case prior to his 12am set at Flames Central. Through & Through & Through it was awesome.

Unlike most rain in Calgary, this rain was warm--like the sky was saying "hey guys, I need to piss on your parade but I will make it tropical." Lighting and thunder crackled in the distance while Plaskett pulled out the stops, gave it his all, even sampling a new song yet to be released. I loved the set so much I dragged my soggy friends to the next venue where we caught Elliott Brood and then another set by Plaskett and band--lucky for us he played another new track: Park Avenue Sobriety Test, a soon to be classic.