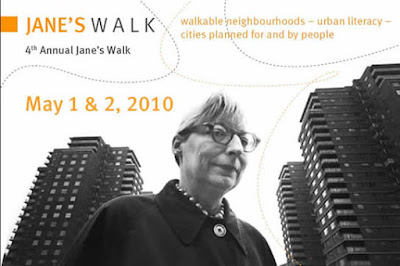 Since the 1960's, the name Jane Jacobs has meant a lot, to a lot of different people. Most definitely the neighbourhood in New York, Greenwich Village, that surrounded Washington Square where a giant modern freeway was planned to be built as a means to 'revitalize' the urban center. Jacobs rescued the park and several other neighbourhoods over the next 50 years and today her legend lives on in the neighborhoods she helped saved, and the millions she has inspired. Beginning in 2007, a Toronto group started 'Jane Walks' as a way to keep Jacobs' ideas alive. Each year people around the world participate in 'Jane Walks'. They have been organized by private individuals, community associations, and everyone in between as a means to see their neighborhood from an entirely new perspective, that of Jacobs. The intriguing and somewhat ironical element is that Jacobs would never force anyone to see anything her way, and would instead invite an individual to see through their own eyes and needs. Authentic communities in Jacobs' eyes would be built by those that inhabit them, not developers or private interest groups. The further irony exists in that Jacobs' ideas are manipulated by many urban planners who honestly believe they are following her guidance. But, as Jacobs stated in several interviews prior to her death in 2006, these notions of 'New Urbanism' and 'Urban Planning' are perversions by groups who believe they know better than the people who inhabit an area, or by developers who are not interested in community gains, but rather monetary ones.

Take for example the neighborhood of Garrison Woods here in Calgary. The neighborhood was built as a means to bring suburban dwellers back into the urban core and to provide community amenities. In order to build the neighborhood and consequential infills, old homes and local businesses needed to be removed. Thus, we are left with a faux traditional 'neighborhood', with neatly ordered shops having apartments on top, and condos which rent and cost far exceed the wages offered at the 'neighborhood' multi-national--Shoppers Drug mart, Rogers video etc. If the word 'gentrified' doesn't apply here, I don't know what does.

The Jane Walks take place in cities across Canada, the US, and the world. Join JB on the DEP this Saturday as she talks with The Calgary Foundation about this year's Jane Walk. And visit the website for more info on seeing the world through Jane's eyes: http://janeswalk.net/about
Email Post
Labels: Calgary Garrison Woods Gentrification Jane Jacobs Urban Planning