Arcade Fire - We Salute You 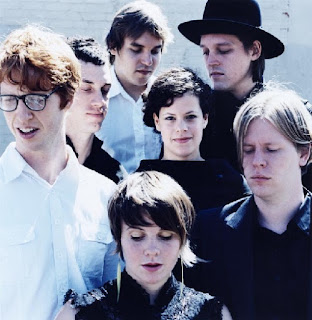 As anyone who lives on the planet of pop knows, Arcade Fire and their album "The Suburbs" took home this year's Grammy for Album of The Year. All the controversy of the well loved Canadian indie rockers winning the big prize makes this DEP host smile with glee and question why it didn't happen 5 years ago. But alas, it has happened and the 'who's? and WTF's!' make it all the more exciting. Sort of reminiscent of 'Crash' winning Best Picture at the Oscars, all the confused sirlon wearing gaga's can pick up their dropped jaws and carry home their sorry sorry selves without their shiny shiny statues.