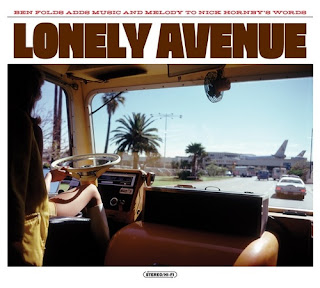 It has been almost two years since Ben Folds released Way to Normal in 2008. And although the release had chops reaching #11 on US charts, it was nothing near the reach and depth found in his most recent Lonely Avenue--a collaborative project between the literary brilliance of Nick Hornby (High Fidelity, About a Boy) and musical madness of Ben Folds. Rolling Stone gave the album a 2/5 and let that alone be a sign that this album requires a second look.
I wasn't too tired of Ben Fold's music, but let's face it, inspiration in lyrics can be tough and instead of another contrived ballad, this duo is able to be clever, humorous, thoughtful and heartfelt. Ben Folds pulls out strong influence from Elvis Costello; nobody knocked Arcade Fire when they ripped The Boss in Neon Bible  and in this case it is done with just as much passion and raw energy.
The album starts off roaring with 'A Working Day', reminiscent of the teenage angst Ben Folds Five gained fans and foe over; and again a perfectly soft angst ballad in 'Picture Window'. 'Your Dogs' is filled with kismet social commentary and political fever and 'Saskia Hamilton' will have you pumping your fist and thinking "this one's for the geeks!!"
Find more artists like Ben Folds at Myspace Music
Find more artists like Ben Folds at Myspace Music
Email Post
Labels: MUSIC Music Reviews